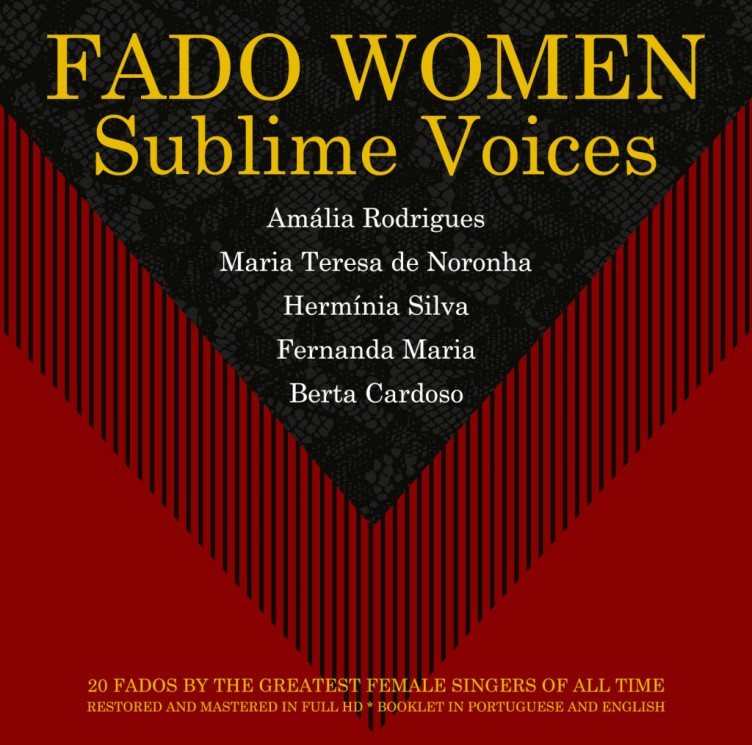 FOR THE FIRST TIME AN ANTHOLOGY WITH LOVE SANG IN THE GREAT VOICES OF FADO.

BOOKLET IN PORTUGUESE AND ENGLISH

A PERFECT GIFT FOR SOMEONE SPECIAL

The sublime female voices of fado

By mystery or fate ever since the early days of the appearance of fado the female voice has always had more visibility than the male voice. The first figure to become known in fado was precisely a woman - Maria Severa Onofriana (1820-1846) who lived only 26 years but whose image embodies fadoeven today. This phenomenon may be explained by the fact that women are able to carry a different feeling in the voice that makes shine the feminine fragility, love, lack of love, sadness or joy that are very common themes of fado.

This work intends to praise the feminine side of fado and for this purpose we selected the top five female singers of fado who have had a remarkable career in the twentieth century, becoming compelling icons in the history of fado. These artists had a unique voice with an extraordinary interpretative ability and were accompanied by the cream of the crop of musicians of the time, sharing tables, nights, stages and other experiences with great poets and composers who wrote and composed for them. As a result they left a vast repertoire full of hits that are part of the fado songbook and some of which can be heard in this work.

Amália Rodrigues debuted in 1939 in the Retiro da Severa, this was an auspicious beginning that earned her a long career that lasted throughout her life and in the course of which she received numerous awards and honours worldwide. It is with Amália that fado becomes definitely international in the mid twentieth century. Ms. Dona Amália, as she is known in the fado circle was one of the brightest singers of the twentieth century, commonly hailed as the voice of Portugal, she recorded hundreds of songs and many of them achieved great success.

Maria Teresa de Noronha is another case of uniqueness; early on she began singing at parties for family and friends. In 1938 she began her career singing in the National Radio in a biweekly show that has continued up to her retirement from artistic life in 1962. It was on this radio program that she gained popularity, becoming the highest figure of the aristocratic fado and which she has advocated. Maria Teresa de Noronha is much admired for her particular way of singing and she is one of the greatest voices of fado ever.

Hermínia Silva began her career as an amateur actress in 1925 in a recreational society at her neighbourhood, where she also sang her first fados at the piano. Her career continued on the great fado houses and other show venues where she earned great recognition. Hermínia Silva joined the cast of several theatre plays and starred in blockbuster movies where her singer skills were enhanced abreast of her comic performances. It was on the theatre stage and the movie screens that many of her greatest hits emerged. She received several awards and honours throughout her career and was one of the most popular artists of the twentieth century in Portugal and the most traditional and funny of singers.

sing in the great fado houses. It was in the fado houses that her talent attracted the attention of the public and other actors, emerging thus one of the most representative and charismatic voices of traditional fado.
In 1952 she auditioned for the National radio station and sang there for 5 years.
In the course of her artistic life she recorded dozens of records, many of them featuring big hits, which made her earn the recognition by the several awards she has received.

Berta Cardoso sang for the first time in public at the Salão Artístico de Fados, in Parque Mayer where she also debuted later as an actress.

Since her debut had a dizzying rise, coming out of anonymity to first figure of the national song while combining the musical theatre and film with fado performances. She sang in the best fado houses and played a key role in the first period of the fado internationalization. Her voice had a perfect diction and a balanced tone, this was the reason she became known as "The golden voice of fado".

These five majestic singers, women and fado singers took fado to its highest expression; it is to them that this work pays tribute and whose legacy is reflected in every generation that followed. This record brings together four songs from each of these masterful artists, each one with its own style – they enriched fado irreversibly with their sublime interpretations and therefore they are considered major references by their peers.