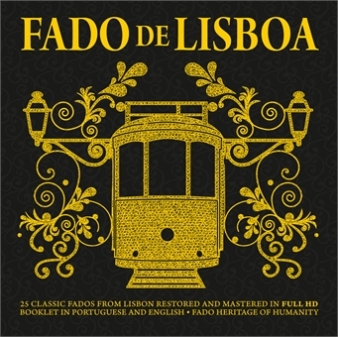 Can you imagine dwelling in the alleys of Lisbon and on the same night you had a chance to choose one of the several fado houses where Amália Rodrigues, Alfredo Marceneiro, Lucília do Carmo, Fernando Farinha, Fernanda Maria, Carlos Ramos or Hermínia Silva sang? It is precisely this imagery that the record Fado de Lisboa intends to recreate, giving the chance to listen to 25 fado from these and other great voices that sang in this city.
On the Fado de Lisboa CD these great performers sing for us some life stories that are part of the collective memory of the Portuguese people.
These generations have definitely marked the most brilliant period of fado in the decades of 1950 and 1960, contributing to a greater enrichment for the history of this song.

Lisbon is the most sung about city in the world and the birthplace of fado. Many of these fados are authentic portraits of this old Lisbon. By its historical, human, cultural and universal nature, the Lisbon fado was promulgated by UNESCO - Intangible Heritage of Humanity in November 2011. However, fado has always been the heritage of those who sing it, who hear it and especially those who feel it.
Fado is above all, feeling, a liberation of the soul that cannot be explained.

Fado was born in Lisbon in the early nineteenth century, emerging as port music in the cultural melting pot that was the Portuguese capital at the time. Maria Severa Onofriana (Lisbon, 1820 - Lisbon, 1846), or simply Severa, was the first artist of fado to become known.

Severa well embodies the beginnings of fado, a beautiful bohemian women and prostitute by profession who played guitar and sang fado in the streets, taverns in the neighbourhood of Mouraria and other places.

It was within the popular circle of the oldest neighbourhoods in the city that fado was developed and gained maturity to expand throughout the country and through all social classes. In the second half of the nineteenth century fado became the largest national song, it was in this period that the Portuguese guitar definitely joined fado. In the last quarter of the nineteenth century fado was taken to the noble halls where it evolved poetically and artistically. At the dawn of the twentieth century the earliest written publications about fado appeared.

With the decline of the monarchy, fado was used by Republicans in the dissemination of political messages. Despite its ascension, fado got banned in the 20s of the XX century by the military dictatorship that ended the First Republic in 1910.

In 1925 with the first radio broadcastings, fado gained great popularity and in this same year the first recordings in 78 RPM first appeared.

In 1927 a law was passed obliging theatre operators to take a professional licence in order to perform in public venues, which also needed licenses.