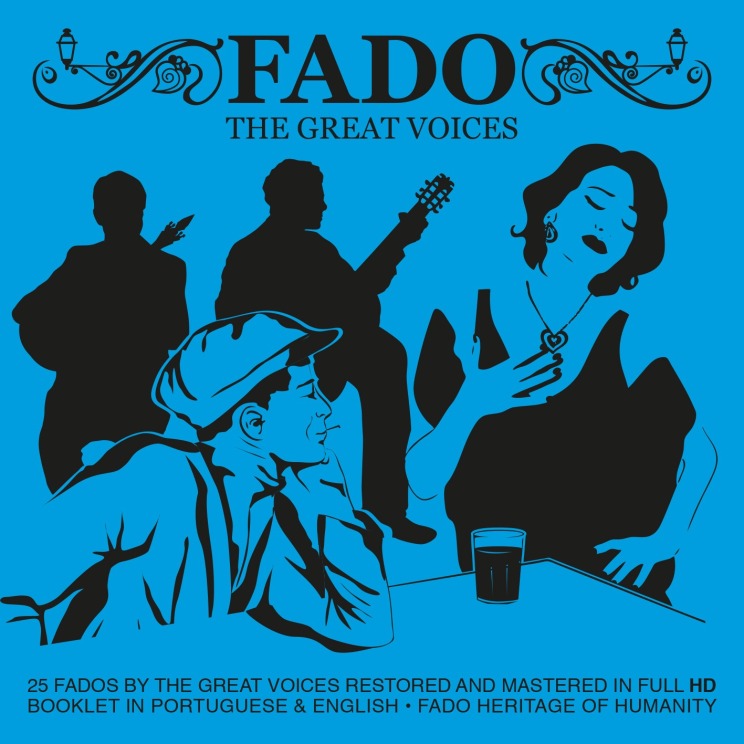 In the Fado by the great voices record one can hear 25 fados restored and mastered in HD audio, performed by timeless names of the Lisbon’s song which marked the most fascinating period in the history of fado in the years 1950 to 1960, referred by many as "The golden age of fado".

An exceptional gathering of generations that raised the fado to a unique heritage of the Portuguese people and since 2011 is also Intangible Heritage of Humanity by UNESCO.

Many of the fados one can listen today, which are sung and recorded by the new generations, came up in these decades, many of which are contained on this CD.

Younger singers sometimes claim that enjoyed to have lived in this era. It is natural for them because this is the time of reference, where fado reached his majority and went out of doors becoming from the world as well, paving the way for all generations to come.

The golden age of fado

The origin of fado remains a mystery; it is also an issue that has generated some controversy among scholars who advocate different theses. What seems to be unanimous is that it has developed in the Lisbon’s melting pot, having established itself as a musical expression in the early nineteenth century, being a Portuguese typical music style.

Since the early days and despite all the highs and lows that fado faced it has found its natural process of evolution, through the monarchy to republic with a strong vitality and continuing to position itself as one of the greatest assets of Portuguese culture in the twentieth century.

In the 1930s and 1940s, fado continues booming gained ground in literature, theatre, film, radio and music industry. In those decades has built the

fadista imaginary that comes to solidify in the 1950s and 1960s of the so called the golden age of fado.

It is during this period that are acclaimed many of the great voices of all time, as well as writers, poets, musicians and other actors whom we remember today for its excellence that contributed to the priceless legacy for all generations to come.

In this time of great artistic glow there had been two factors which contributed decisively to the rise of fado, one of them was the start of broadcasts of

RTP in 1957 that included regularly fado in its programming. The TV has substantially increased public visibility of singers, giving many the size of stardom. The other factor was the arrival of the turntable to Portugal. The vinyl starts to circulate on the market replacing the fragile 78 RPM; the amazing quality of this format quickly captured the general public attention.

These were the years that marked the definitive internationalization of fado being Amália Rodrigues the main star that shone in a constellation which included other big stars like Alfredo Marceneiro, Hermínia Silva, Fernando Farinha, Maria Teresa de Noronha, Tristão da Silva, Fernanda Maria, Carlos Ramos, Maria José da Guia among many others.

At the dawn of the 1960s influenced by this great generation arise other artists that would become great names in this Portuguese song as Carlos do Carmo, Maria da Fé, Maria do Rosário Bettencourt, Teresa Tarouca, Beatriz da Conceição, D. Hermano da Câmara, João Braga among others.

Fado is also the handing over of the older singers for the youngest. As such it is important to highlight the importance of fado houses, where most singers begins, lives together, learns, grows and gain maturity to other stages anywhere in the world.