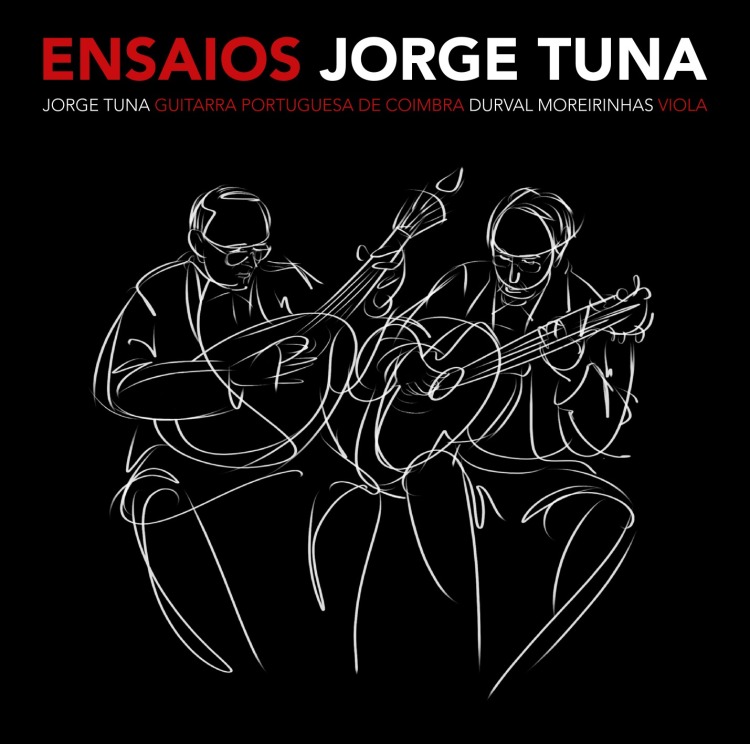 Jorge Tuna is perhaps the last of the great guitarists of Coimbra, possessing a singular language near the so called Coimbra’s school, recognizes the importance of Artur Paredes in his inspiration in the same way has inspired his son Carlos Paredes.

The guitarist is also an innate composer who for more than 5 decades contributed to the enrichment of the repertoire of this instrument with more than 60 original recordings released - which earned him the award of the Amália Prize in 2006.

The album "Ensaios" is nothing more, nothing less than the recordings of the rehearsals made in his house between 1989 and 2015 with his long time companion Durval Moreirinhas in the viola that died in 2017 and to whom Jorge Tuna dedicates this work. Durval Moreirinhas went to Jorge Tuna as Fernando Alvim went to Carlos Paredes.

Regarding the execution of the instrument Jorge Tuna has a particular technique, sometimes making use of the ring finger beyond the usual use of the index and thumb.

In this work one can hear 15 original compositions that will surely inspire the generations that follow and here they will discover a repertoire that has both fascinating to listen and interesting to perform.

The 15 musical compositions selected for this CD are just a “drop” in the extensive musical production of the two musicians along decades (since 1958), but mainly focusing on the period from circa 1989 until 2015. In such a chronology Jorge Tuna (JT) and Durval Moreirinhas (DM) gave us 1 LP and 3 CDs. As a result of the public recognition of the great quality of such recordings the two players were distinguished with the Amália Rodrigues Award / 2006. But a lot more remained unpublished, recorded casually away from the studio (hence the CD title), with the support of old cassettes, later on digitalized, which have now partially been revealed through a producer.

The present sample, despite a greater complexity, is in line with what the duo of performers was giving us since the second half of the 60´s, when they have made decisive steps in composition and harmonization by reducing the instrumental body to two instruments: Portuguese Coimbra Guitar / Viola. This procedure unquestionably set them apart from the traditional style of Coimbra Guitar music.

Which steps are these?

All these characteristics, long ago initiated in the discography of JT/DM, have remained the same until nowadays.

And much more should be pointed, from the execution of the guitar accords in the three groups of deeper chords (see “O homem que vem de longe” or “Nos Jardins de Monserrate”), to the reminiscences of the classical universe (from the baroque to the early romanticism – see “Chopinianamente”), to the descriptive music (again “O homem que vem de longe” or “Há nevoeiro na ponte”) or ambiental music (see the Triptic dedicated to Monserrate).

⦁    Jorge Tuna’s music is comprehensive. It´s enough to see how the tones in the execution of the musical pieces practically embrace the whole scale. However, there are some musical pieces, that because of the tone in which they were composed remind us of the Jorge Tuna of all times; it´s the case of the E minor (once more the example is “O homem que vem de longe”).
⦁    The 50´s are long gone, but, at times, JT gives us one or another reminiscence of the old Coimbra:  just listen to the central and final motive, in B minor, of “Turbilhão”.
⦁    Although there are varied time measures, JT has a marked tendency to the triple time-measures (waltzes).  It´s the case of “Búzio” or “Adágio de Verão”.

Jorge Tuna / Durval Moreirinhas were a unique duo, on account of their many years association, their production and outstanding musical quality.
And it is quite remarkable that these two players have had such an activity at the same time of their professional lives as a medical doctor/cardiologist and University Professor (JT) and as a bank clerk (DM) and have achieved such an impressive result. Those who have had the good fortune of knowing their total discography, now enriched with these Rehearsals (Ensaios), may feel  fortunate, as they will be given  the opportunity (that doesn´t yet exist – and will it ever exist? – for Artur Paredes or Carlos Paredes) of embracing six decades, at least, of musical composition and discographic recording.

“In Memoriam“
This record, accomplished at home during our weekly rehearsals, is dedicated to the memory of Durval Moreirinhas with whom I‘ve had the good fortune of expressing in music the brotherly friendship that united us since we were young students.